Vendorful allows for granular control over user permissions. However, it can be painstaking process to configure a new set of permissions each time you added a user. To simplify and automate the process of ensuring that users have the appropriate permissions, Vendorful offers groups.

Assuming that you, yourself, have the requisite permissions to manage groups, you should be able to click on a tab to do so. If you're just starting, there won't be any groups set up.

This is easily remedied, however. Click the "Create New Group" button and enter a name. Once you've done that and clicked submit, you'll have an empty set of permissions for the group with no users in it. I called mine "Buyer Stakeholder" and plan to use it as the default that will be applied when I add new buyer stakeholders to strategic sourcing events and reverse auctions. 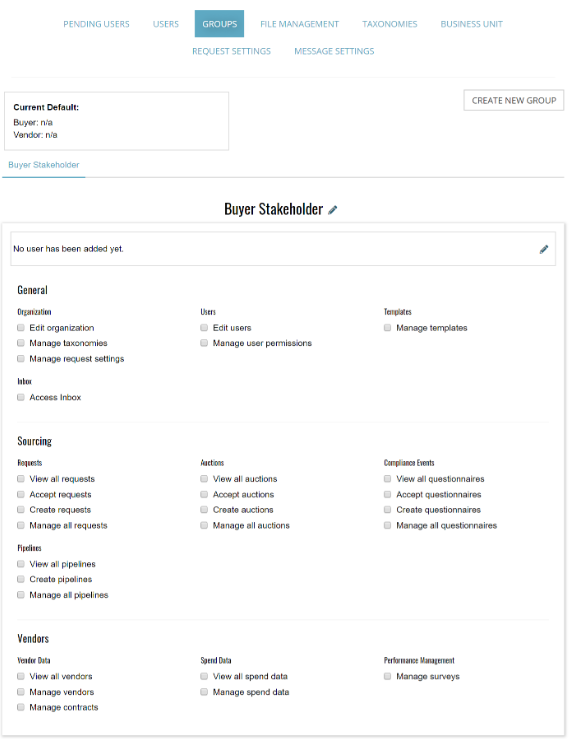 Click all of the boxes that you want enabled for anyone who is part of this group. Once you're done, you can to two things.

1. You can add one or more users. Simply click on the "edit" icon (circled in red):

2. You can set this group to be a default. While admins can specify which users go in which groups, the default groups will apply when users are invited by other non-admin users. Vendorful applies contextually-sensitive groups. This means that if you add a new user while replying to an RFX, the user will be placed in the default vendor group that you've configured. On the other hand, if you're in a buyer context, e.g. an RFX, a newly-invited user will be placed into the default buyer group. To configure this,

This above image shows a group called "Buyer Stakeholder" that is for buyers and was set to be the default group for buyers.

After a group has been created, you can add and remove members as you see fit. Bear in mind that their permissions may change. You can also change the permissions of the group and those permissions changes will apply to all of the users in a group.

Being in Multiple Groups

A single user can be in more than one group. When this is the case, a user's permission for a particular feature will be active if one or more of the groups has that permission enabled. For example, let's imagine a user is in a group called "Admins" which has "Edit organization" enabled and is also a member of a group called "Buyers" which has "Edit organization." That user would have be able to edit the organization information since the permission is enabled in the Admins group. However, if you were to turn this permission off for members of the Admins group, the user would no longer have access to it. Similarly, if you were to remove this user from Admins but not Buyers, the user would lose this permission.